HOOPER AT WORK ON A NEW BOOK.. 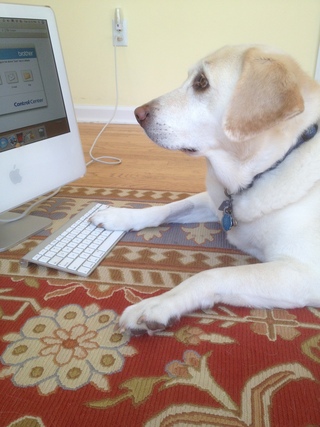 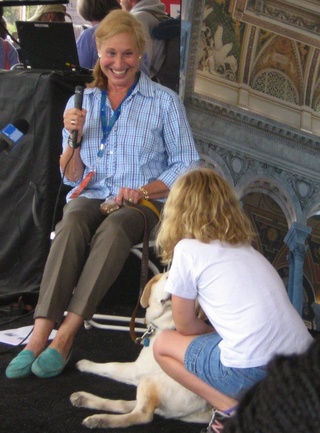 Hooper with a fan following our presentation at the Library of Congress National Book Festival in DC. It was a great event hosted by the Young Readers Center. Thanks to John Cole and Karen Jaffe! 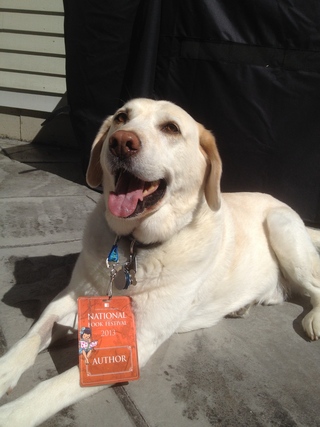 It's official! I'm an author! 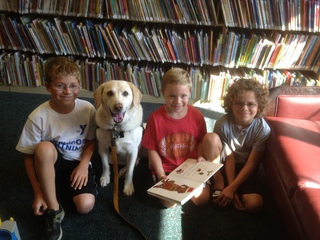 Here he is at the Easton Library getting ready for his big trip.

He's a presenter at the Library Of Congress National Book Festival. (Jane's going too..)
Here's the info--Public is invited:

Meet Hooper the Rescue Dog and his human mom
for a howling good time!

Join Hooper and Christopher Award-winning children’s author Jane Paley
At 1:40 p.m. on Saturday, September 21
In the Library of Congress Pavilion on the National Mall 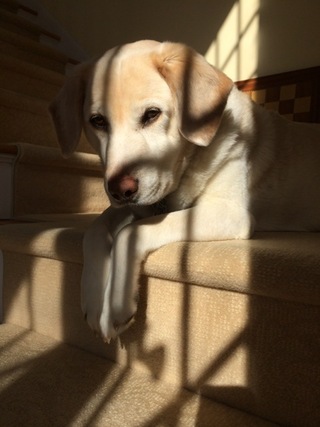 Check out this great site for all children's book lovers and writers. 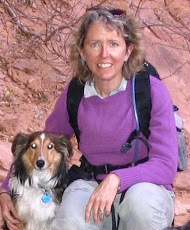 Hooper and I have new friends!
http://bobbiepyron.blogspot.com/2013/03/fido-and-friend-in-five-jane-paley-and.html 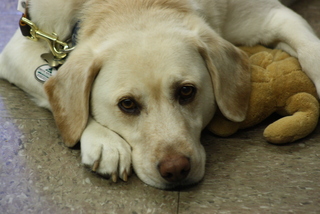 Hoop and his stuffed pal, Steve, listened attentively to questions from the Vroom School third graders.

He really loves the kids and their cool teachers, Jennie and Kristy 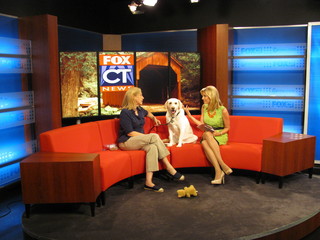 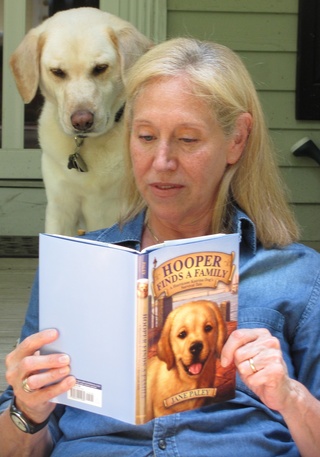 The photo for the New York Post piece was taken by my son, Brian
http://www.ctnow.com/news/morningnews/
We had so much fun appearing on Fox Morning News in Hartford, CT! Terrific crew and wonderful anchor, Sarah French..

This month's YANKEES MAGAZINE is a the first ever all-women issue. I still can't believe I was included in the company of such amazing, accomplished and inspiring women. Definitely one of my proudest moments. And Hooper was at my side! 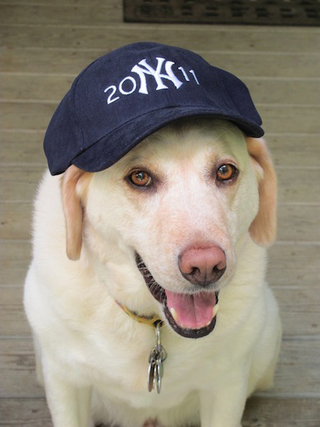 HOOPER's "Back Story"
In this month's LABBIE LEDGER, read about the true story of how our family found Hooper on-line at Labs4rescue.com

With the possibility of more late summer storms, Hoop and I are leaving these reminders just in case...


It is important for all who are in the path of a severe storm to make the following emergency preparations for pets:

Make sure you have 5 days of drinking water, pet food and medications on hand

If you have to evacuate pack:
food and water
plastic bowls
medicines
can opener and utensils if needed
leash
comfort toys
crate if you have or can get one
spare blanket and towels 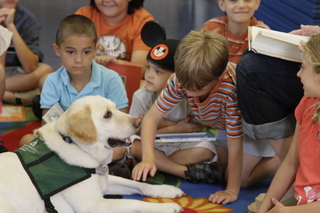 Kids from Easton CT read favorite books to Hooper when the CBS News crew came to town to tape a segment for THE EARLY SHOW. Tune in to see Hoop and me Saturday, July 16 at 8:15 am ET!!!

HOOPERCAM latest CBS innovation
A DOGSTAR IS BORN ON CBS EARLY SHOW! The Brad Pitt of Yellow Labs make his national television debut.. Click below to see his media moment 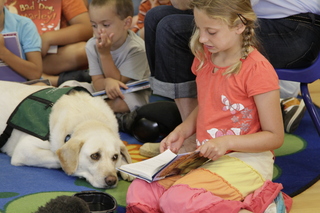 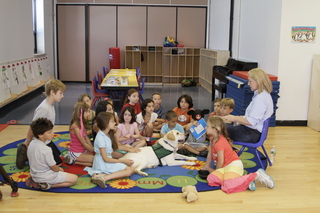 The Easton Community Center was the setting for the fun. Shout outs to Joel Silkoff, Facilities Director for hosting us.

Once again, the boy is a star.

And USA TODAY wrote all about it. Check it out right here!

August 4, 2011
A photo from the HOOPER launch at YANKEE STADIUM is featured in this week’s Publishers Weekly Children’s Bookshelf! It’s also online here:

July 29, 2011
We had such a great day at the Windsor Terrace Public Library in Brooklyn yesterday!
What a crew of eager readers! Hooper enjoys hearing kids read to him, especially when they're reading about HIM! We had a lot of fun and want to thank Children's Librarian, Kimberly Grad, for inviting us. Hoping for pictures and will post them when they arrive. Shout outs to summer helpers Keshaun and Devaughn--Great work, guys!
Also Channel 12 in Brooklyn was there and Hooper is looking forward to seeing himself on television again. (I hope we don't have a Miss Piggy on our hands when all this hoohah is over!)

July 24, 2011
Hoop's resting from his various star turns and getting back to business..The business of encouraging kids to read. On Friday afternoon, we visited the CH Booth Library in Newtown and read a couple of stories. There was a pretty big crowd of children 5 years and up. Good readers and listeners all.

On Saturday, I went to an all-human R.E.A.D. workshop in New York City to sharpen my skills for upcoming library visits. (Great day--Terrific exchange of ideas about how therapy animals can help young readers--with research to back it up.)

We'll be in Brooklyn on Thursday, July 28 at the Windsor Terrace branch. Looking forward to it!


July 13, 2011
Really fun interview and review today in Chic Galleria, a site I like a lot. See for yourself!


July 8, 2011
Hoop and I are still recovering from our party at Yankee Stadium, where Hooper did a meet and greet with fellow Yankee fans. He's been a fan himself since coming to our family 5 years ago. He wagged nicely throughout the game, but couldn't restrain himself around the buffet table. When he thought no one was looking, he vacuumed for crumbs.
Why not? Isn't ballpark food better than kibble?
It was a fantastic night, made possible by Hooper's Godparents, Randy and Mindy Levine.
I think the expression "lucky dog" was coined for Hooper.
It was a night our family will always remember.

Guess what?
Hooper is going to Yankee Stadium on Thursday night. He and I will be celebrating the arrival of our book with Randy and Mindy Levine! How cool is that?
Will we be there to see Derek hit #3000?
As you may know, we are big Yankee fans and Hooper, (who was probably a Braves fan when he was a puppy) is now a proud Bronx Bomber fan. We are over the moon that we've been invited to the park.
Will give details on Friday.

When I take Hooper into Home Depot, everybody (well, almost everybody) wants to pet him, hear about him or give him a treat. He’s been variously offered pizza, soy chips and Tootsie Rolls. (Uh, no thanks.)
Hooper is a yellow Labrador Retriever, a breed which for some reason makes people swoon. He makes the most of his Brad Pitt looks by locking eyes with passers-by and then he ever so slightly inclines his head and smiles. Where he learned his pick-up technique, I’ll never know.
9 times out of 10, people stop, sigh, and ask his age. I don’t know, I tell them, because he’s a Hurricane Katrina rescue, a bubba from Lake Charles, Louisiana. This news makes people happy.

I wondered what it must have been like for a puppy to survive in such catastrophic conditions. Then I realized that his struggles were a metaphor for the struggles of all kids at one time or another. As a mom (and part of a community of moms), I know how our kids want to prove themselves academically, athletically and/or socially. They are afraid. They hurt when they feel like outsiders. They feel humiliated and small.

Hooper's story is a book for tweens, but anyone can read it, and my friends, all of whom are well past tweenhood (by about 30 years) admit to falling for ole golden boy’s exploits. Parents like reading it to kids, who learn about Hooper and in the process, learn about themselves.

If you hate dogs or are a loyal cat person, this book’s not for you.
If you are stressed that the book has a sad ending, don’t worry!

We have a framed sampler in our bookcase that reads, “If you want the best seat in the house, move the dog.”

And that says it all. 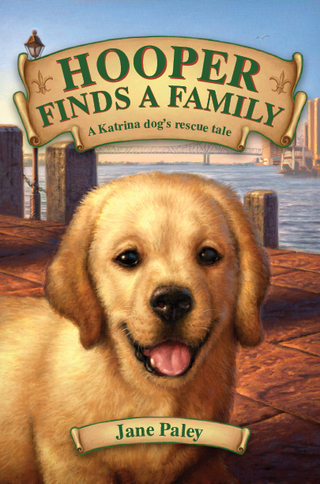 Check out my new book written for children ages 8-12 (grades 3-7). It will be in stores June 28, in advance of the sixth anniversary of hurricane Katrina. 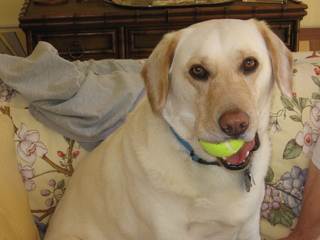 One of the things that makes life grand: the tennis ball's fuzzy coating and the chewy rubber underneath. 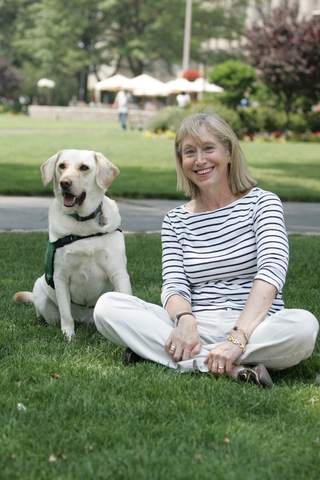 Here's Hooper in his work clothes. We love visiting libraries to encourage kids to read. 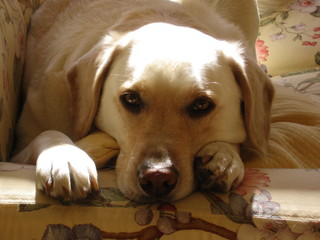 He actually likes having his picture taken. 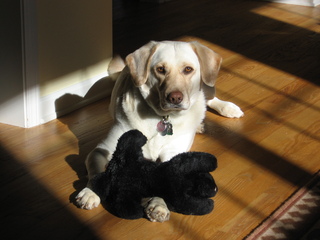 Here he is in an arty pose with Clara, his BSF (Best Stuffed Friend)
Jane on Facebook 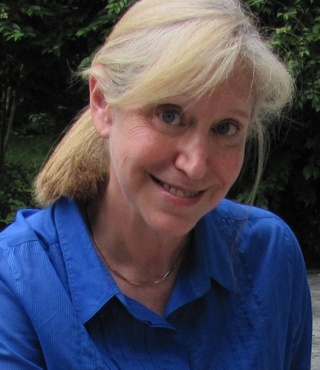 Jane Paley has enjoyed a career as a writer and independent documentary producer. She was the director of community relations for ABC Television, and her ABC Notebook educational programs were awarded an EMMY and a National Education Association Award. As a partner in Paley-Price Productions, she wrote and produced family-oriented programs for HBO, PBS, and Lucasfilm, among others. Paley was an Assistant Professor of English and Speech at St. John’s University in Queens, New York. She and Hooper are a registered Pet Partner team; they regularly visit schools and libraries. 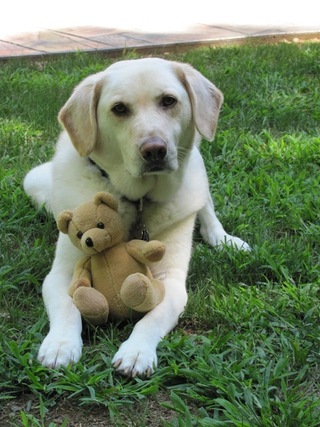